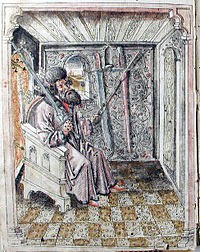 A depiction of a Master of Fence found in MS 1449,
thought possibly to represent Liechtenauer
(though more likely the author).

Little is known about the great Master Johannes Liechtenauer outside those references found in the various treatises and manuscripts written by subsequent masters who followed his teachings. Liechtenauer's unbroken legacy directly influenced masters for over 200 years, surviving late into the C16th with Joachim Meyer's manuscript (MS Var.82) consisting of an anthology of treatises including Ringeck, von Danzig and Syber, all disciples of the Liechtenauer system. It is highly likely that Liechtenauer continued to influence masters indirectly via the study of treatises written by his disciples. Today the School of Medieval European Fencing have dedicated over 25 years of research and study in deciphering the Liechtenauer system and teach what we believe to be the only true martial based system reflecting Liechtenauer's original teachings. No other martial system has influenced our understanding and all that we know about historical European martial arts (HEMA) has been derived from Liechtenauer sources.

Johannes Liechtenauer, active in the mid to latter half of the 14th Century, is considered to be the father of high medieval martial arts. This was primarily the result of the consolidation of his understanding, taken from his experience as a journeyman, into a system of fence that gained renown throughout Europe in the late medieval period.
As a young journeyman, Liechtenauer would have travelled to many countries in search of Masters of the Art from whom he could learn. As his experience grew so did his understanding, gleaning the best techniques and using them to define a series of core martial principles upon which his entire system is based. His specific reference to, and understanding of, these universal core marshal principles, combined with his Maisterhaw, establishes Liechtenauer as a great Master and sets him apart from his contemporaries during and beyond the Medieval period and continues to be a benchmark for HEMA practitioners to aspire to today. Liechtenauer's thorough understanding of body mechanics, combined with his depth of knowledge concerning the relationship between time, distance, intent and the psychology within the fight, makes his system comprehensive and yet poetically simple when fully understood.

Liechtenauer's teachings were revered by his students and some became masters in their own right. As a mark of respect and acknowledgement the 'Society of Liechtenauer' was formed in the late 15th Century, many members of whom were to write fencing manuals quoting the mnemonic aids written by Liechtenauer himself. The verses quoted in the different manuals that follow the Liechtenauer tradition, which have survived to this day, are almost identical, so it is fair to conclude there is a high likelihood they originated from one source, namely the great Master Liechtenauer, and most likely from a manuscript written by him. Sadly, as yet, we have no surviving evidence of this document although Ringeck alludes to such at the beginning of his manual:

"Here begins the exposition of the manual, in which is written the knightly art of the long sword, composed and created by Johannes Liechtenauer, a great master of the art. May God be merciful to him! He it was who had the manual written with cryptic and obscure words, so that the art should not become common knowledge."

The use of rhyming couplets was a method purposefully adopted to obscure the true meaning of the Art. For Liechtenauer to divulge his hard-learned knowledge in a fashion that was obvious to everyone was effectively to give away his life's work, and in the process to undermine his own importance and consequential employment. By using rhyming couplets Liechtenauer gave his students notes in order that they might remember and reinforce his teachings without providing anyone with the full body of knowledge or understanding. Only those dedicated students of the Art, who fully comprehend and understand the core martial principles and the very essence of what is the 'Art', would have any idea as to what Liechtenauer was referring.